I finally tackled the monumental task of a huge pirate ship the day before my boy's birthday party. We bought this amazing playground off of craigslist about six months ago. My amazing husband disassembled and reassembled it at our house with of course...a few grunts and moans. However, it was worth everything because my kids, and every single one of their friends, adore it! It was the perfect base for a huge cardboard pirate ship. 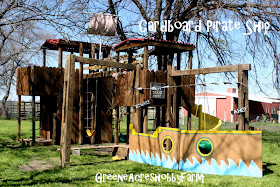 As luck would have it, I inherited some huge pieces of thick cardboard from work. We received a large piece of medical equipment (C-arm) the week of the birthday party. It was sooo thick it was hard to cut with an exacto knife. My husband arrived home and said I should have used an actual saw. Too bad his advice was a little late! 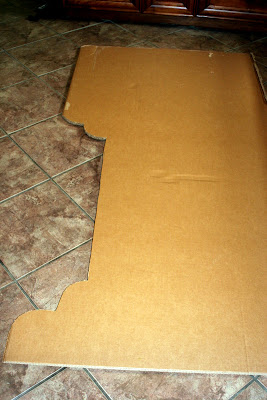 I started out with the design cut above. 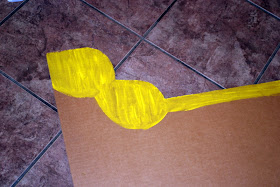 I painted the top yellow with two coats of paint. 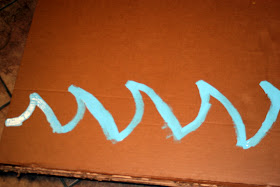 The waves were easiest to outline first, and then paint in blue. I then topped each wave in white. Next, I cut a few portholes out, and painted around them in yellow and green. 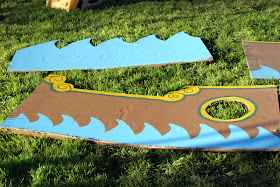 A few waves served as the water off of the pirate ship. We filled it full of blue balloons for the kids to slide into. 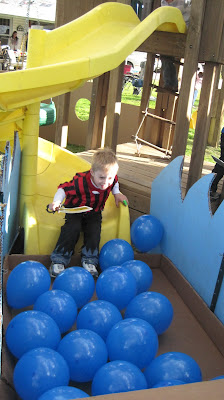 But watch out for the shark!! 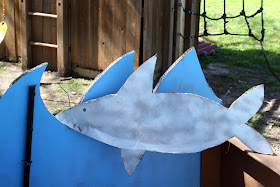 The kids truly had an adventure on the pirate ship. 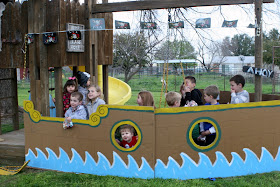 What a crazy bunch of pirates! 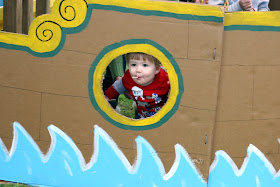 My two year old birthday boy peeking through a porthole. The rest of the party is still to come. I have so many fun pictures to share. See you soon.
Michelle at 7:33 PM
Share