My month continues to be full of excitement...and not the good kind. The other night we were driving home from a friends house and we came up on a very bad two car collision that had just occurred. We live in the country, so emergency care is not right around the corner. I was with my husband and two boys, and he immediately asked if we should pull over. Being a nurse, I would have felt guilty not stopping. However, in nursing there is a big difference in areas of expertise. My background is fertility nursing and surgery center pre-op and recovery room nursing. I am not an emergency room nurse. Each area of expertise takes a lot of training, even though nursing school gives a broad base of education.

We stopped immediately and the first thing I noticed was pieces of the cars scattered all over the road and people attempting to climb out of both cars around tons of air bags. A gentleman was already dialing 911, so I started triaging. There was a woman with an obviously bad break to her arm. We got a floor mat and wrapped it around her arm for support. Her little girl was only four and had facial lacerations and pain to her pelvis. She was guarding it, which concerned me for a pelvic injury. I attempted to calm her and her mom down and then moved on.

The next thing I saw was a newborn baby by the side of the road in a car seat. I asked whose baby it was, and asked if I could move the baby further away from the side of the road. The last thing they needed was a car coming around the corner, wrecking into their cars, or all the people. The baby was not even awake which scared me more. I started to stimulate the bottoms of its feet to make sure he/she would respond. I handed off the car seat to a family member and asked them to keep stimulating the little one.

Five minutes has passed at this point, and I am told there is a head injury in the other car. They are over there trying to remove her from the car. I ran across the road and told her to stay put. I didn't want to chance the older woman furthering any potential problems by compromising her necks stability. She was already applying strong pressure to her head, but it was still bleeding profusely. She was alert and oriented, so I moved on.

This crazy story goes on because there were 8 people involved in the wreck. Those were the worst of the injuries. The ambulance arrived after about 15 minutes, and I gave my "version of report" to the paramedics when they showed up. Glad to go, I headed back to the car. I was mentally exhausted. It made me very aware how tiring it must be to work in a war zone with trauma and injuries all the time. It must take a very special person.

Ok, sorry about the long story. Now on to my latest project. I originally saw this idea from Martha Stewart for Valentine's Day. (She had used hearts) Who knew waxed paper had so much additional potential besides kids crafts. I made these cute wax paper wrappers for some banana bread I made for a friend. 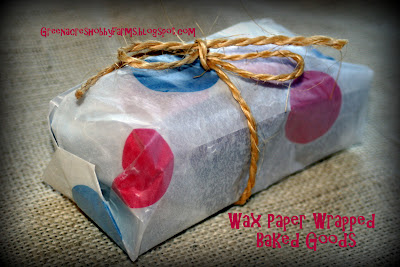 I was so entertained by them, that I made some wax paper cookie pouches as well. 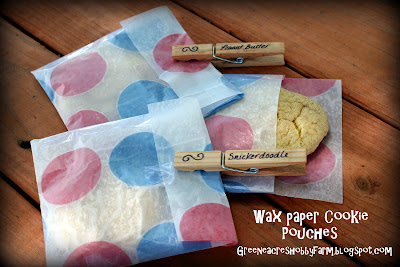 1. I started out by punching circles out of waxed paper. I folded the paper over several times so that it had enough thickness to use a circle punch. I elected to punch blue and red circles for my polka dots. 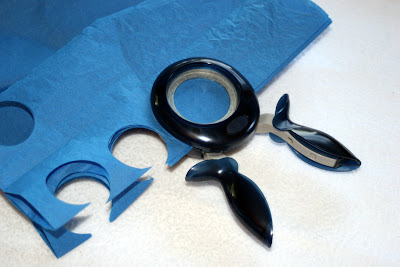 2. Layer your ironing board with paper towels, followed by wax paper, and topped with your polka dots. Place another layer of waxed paper on top followed by another paper towel. 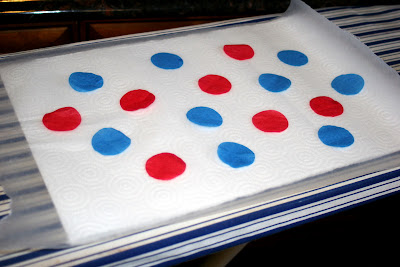 3. Iron the layers together with an iron on warm setting. 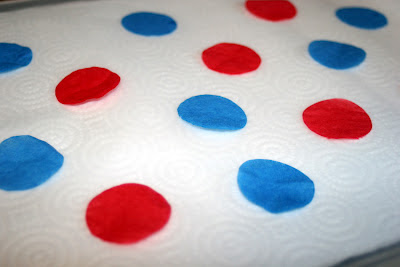 4. Cut your paper into your desired shape. I wrapped my favorite banana bread, and tied it up with twine. It made such a more pleasant gift this way. 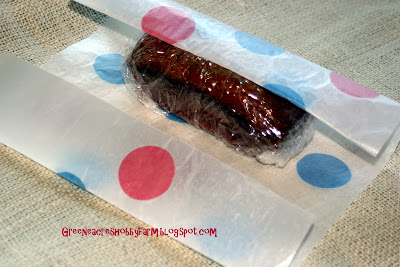 Here is my favorite farm girl banana bread recipe. You should try it sometime. Yum!! 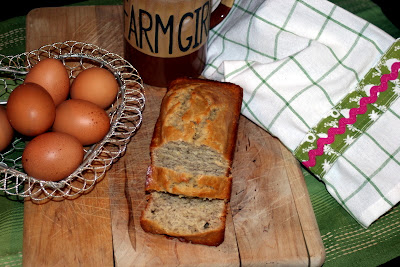