Oh did I have fun making this present! We had a birthday party for my son's cousins, and I couldn't seem to find a present I thought he would really enjoy. I searched the internet for a DIY spy kit to no success. I really wanted to make a spy kit that functioned more like a mystery game or a solve the crime kit. Of course, I came up with the idea a day before the party, so I really had to get to work fast on this birthday present! 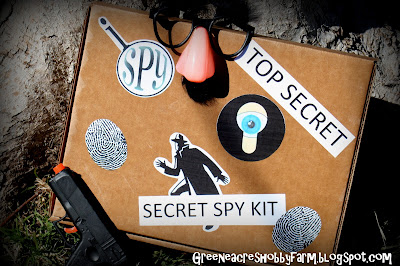 I took a box and modge podged some spy symbols such as fingerprints, a spy, and some words like Top Secret. 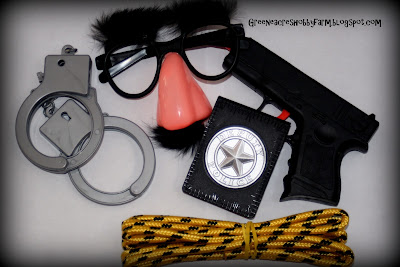 I picked up some essential items for my spy kit at the store: spy disguise, handcuffs, gun, agent badge, and some rope. 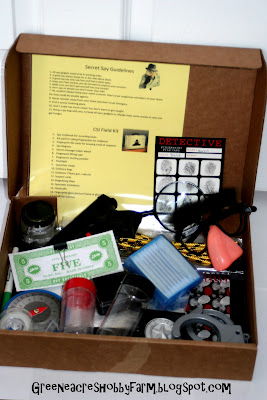 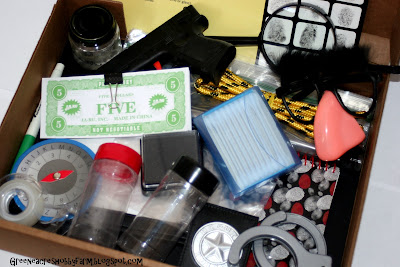 Several of my spy kit items were on sale at Michael's craft store. I completely lucked out. 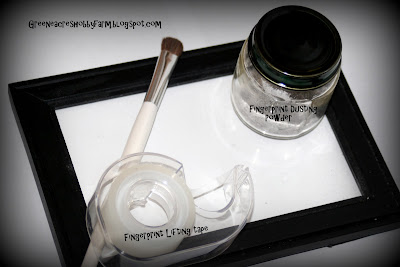 I made some Solve the Case cards and had them laminated. The object of the game is to determine the criminal, weapon, location, and crime. 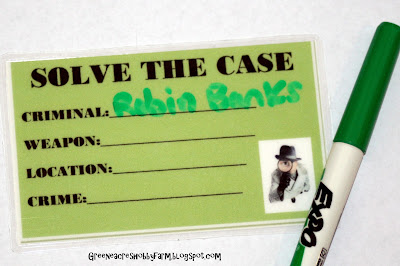 By laminating the cards, the players can use a dry erase marker to write on them. The cards can be easily erased with a cloth or paper towel. 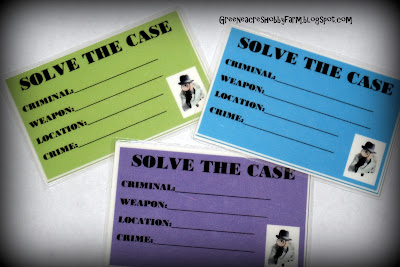 I wanted this spy kit to be personalized for the birthday boy, so I made the suspects family members and good friends. 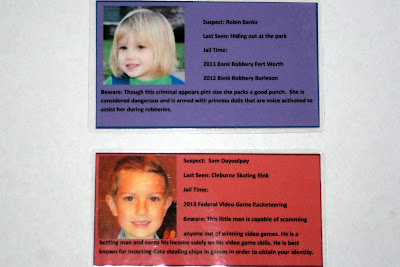 Thank goodness for facebook so I could capture images of all the suspects I needed. I googled some funny names such as Robin Banks (bank robber), Sam Dayoulpay, Sue Case, Nadia Seymour, and more. 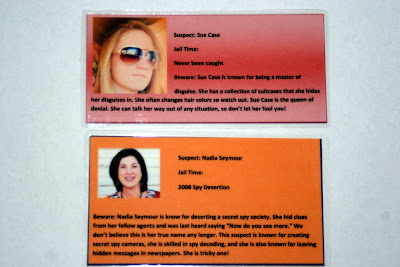 I wrote funny things about each family member because I hoped the birthday boy would get a kick out of reading each suspect's profile. 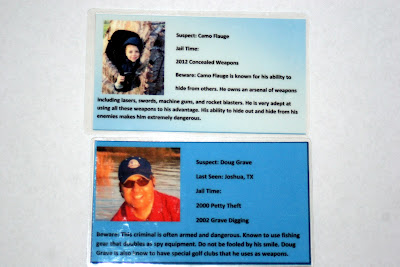 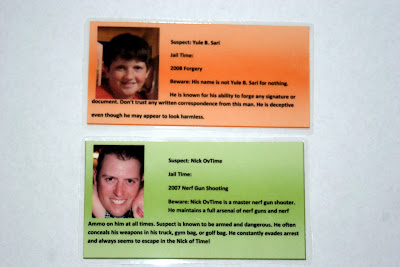 Secret Spy Guidelines
1. All spy gadgets need to be in working order.
2. A good spy always keeps his or her wits about them.
3. A good spy has only one fear and that is other spies.
4. Keep your face neutral, you do not want to express your emotion.
5. Make sure you don't get yourself into any trouble!
6. Don't spy on people you don't know. Stay safe!
7. Be careful! Always keep your name a secret. Don't trust suspicious members of your team, for they could be double agents.
8. Never wander away from your team and don't trust strangers.
9. Find a secret meeting place.
10. Don't make too much noise! You don't want to get caught.
11. Bring a spy bag with you, to keep all your gadgets in. Maybe even some snacks in case you get hungry. 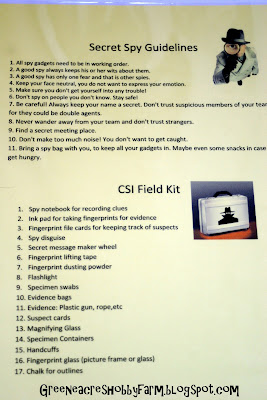 How to Play Secret Agent
Setup: Fingerprint each player on the Fingerprint File Cards.
1.      Select one or two detectives for each game. The detectives should leave the room.
The rest of the players will be in charge of creating the crime scene.
2.      Crime scene team should decide which suspect is the actual criminal. If present, they can place the criminal’s fingerprints on the fingerprint glass.
3.      Select crime scene location and label it with caution tape or clues.
4.      Select a weapon of choice between the rope, plastic gun, plastic knife, and fake money and leave it at the crime scene.
5.      Leave some evidence for the evidence bags and specimen containers. Example, if the criminal loves ketchup leave some out at the crime scene to be swabbed. 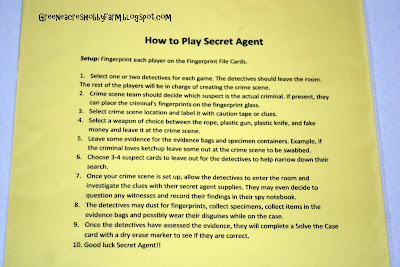 6. Choose 3-4 suspect cards to leave out for the detectives to help narrow down their search.

7. Once your crime scene is set up, allow the detectives to enter the room and investigate the clues with their secret agent supplies. They may even decide to question any witnesses and record their findings in their spy notebook.

8. The detectives may dust for fingerprints, collect specimens, collect items in the evidence bags and possibly wear their disguises while on the case.

9. Once the detectives have assessed the evidence, they will complete a Solve the Case card with a dry erase marker to see if they are correct.