DIY Board Game for Father's Day (Defend the Castle)

My boys were so excited about Father's Day this year. They have been making cards, planning breakfast in bed, and working on a play to perform. Somehow...they made all that happen this morning! It was priceless. I also helped them make a Castle board game with knights and princesses to play with their dad. They named the game Defend the Castle. I thought I would include our easy tutorial on how to make your own board game. Remember you can use any theme you want! 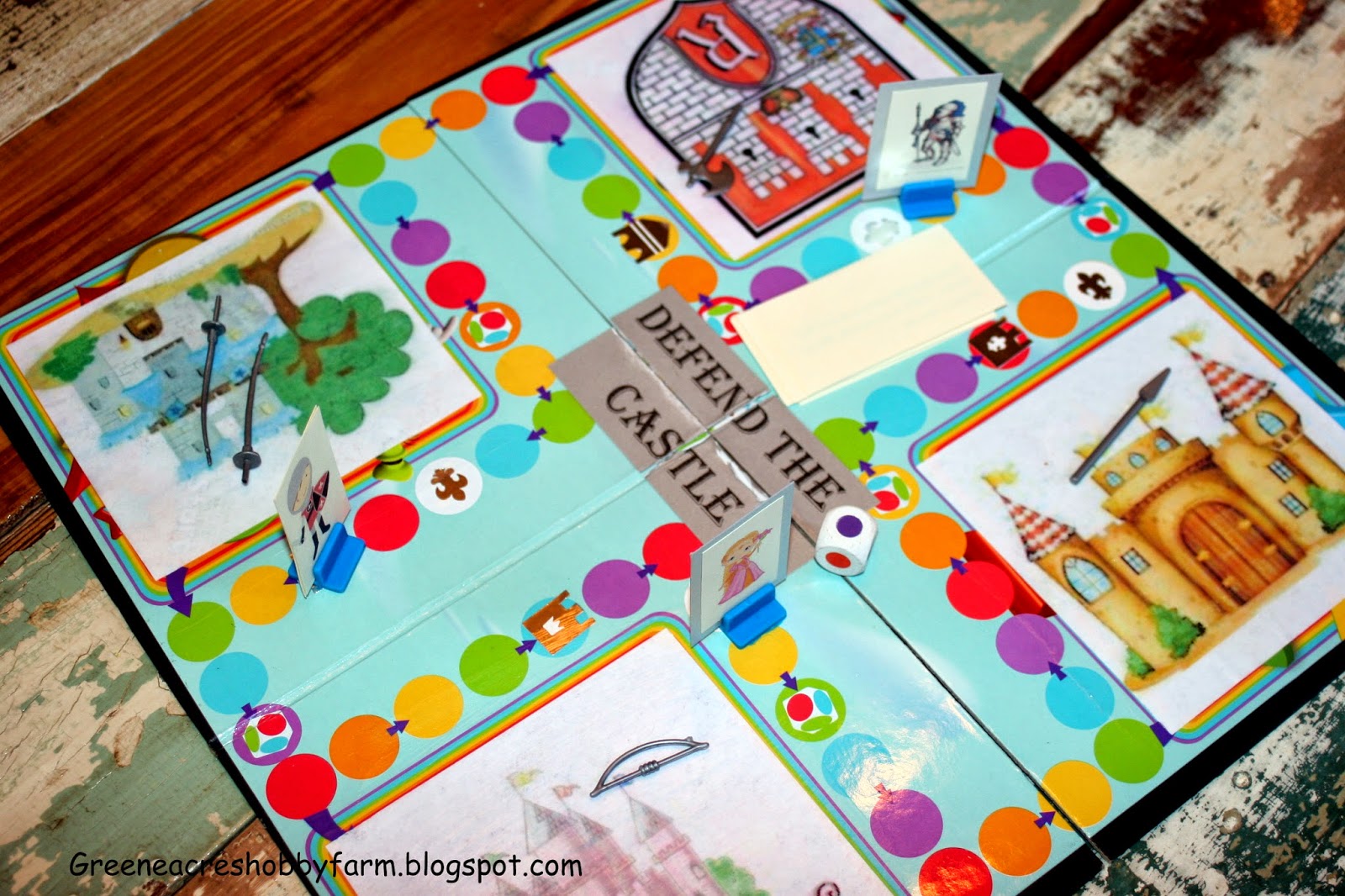 Supplies:
Old board game
Printed pictures
Modge Podge
Dice
Directions:
I think the easiest way to build a new board game is from an old board game. We had a cheap one from Dollar General we didn't play anymore. You could easily pick up one at a garage sale for $1-$2.
My boys decided on a castle theme. I googled castle images and they had the best time picking out their own castle for the board. (I had no idea how much FUN they would have making this!) 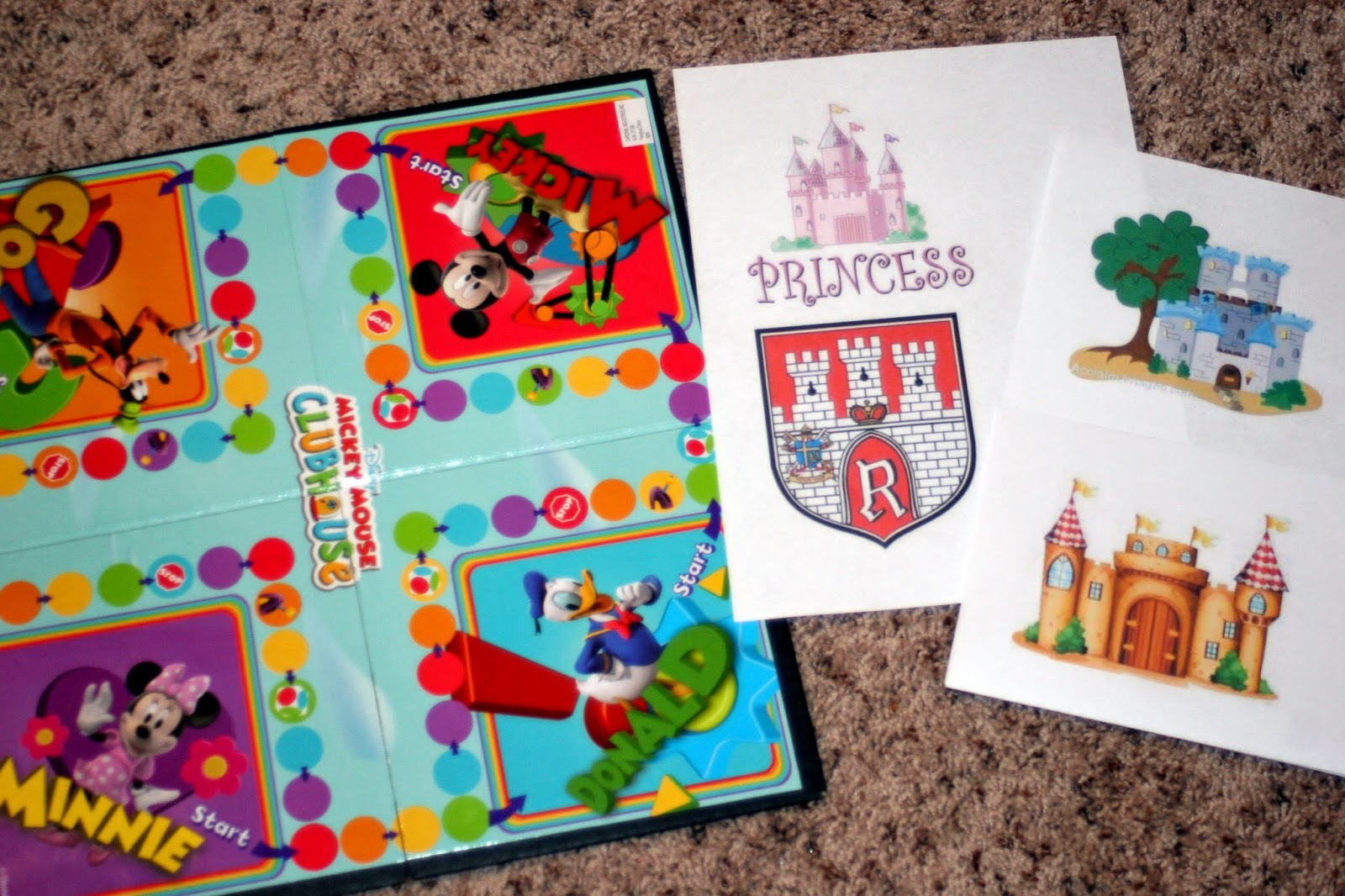 We cut our images to fit the four corners of our game. Then I modge podged them on to the existing game. Remember, you can cover the entire game board or just replace parts of it. 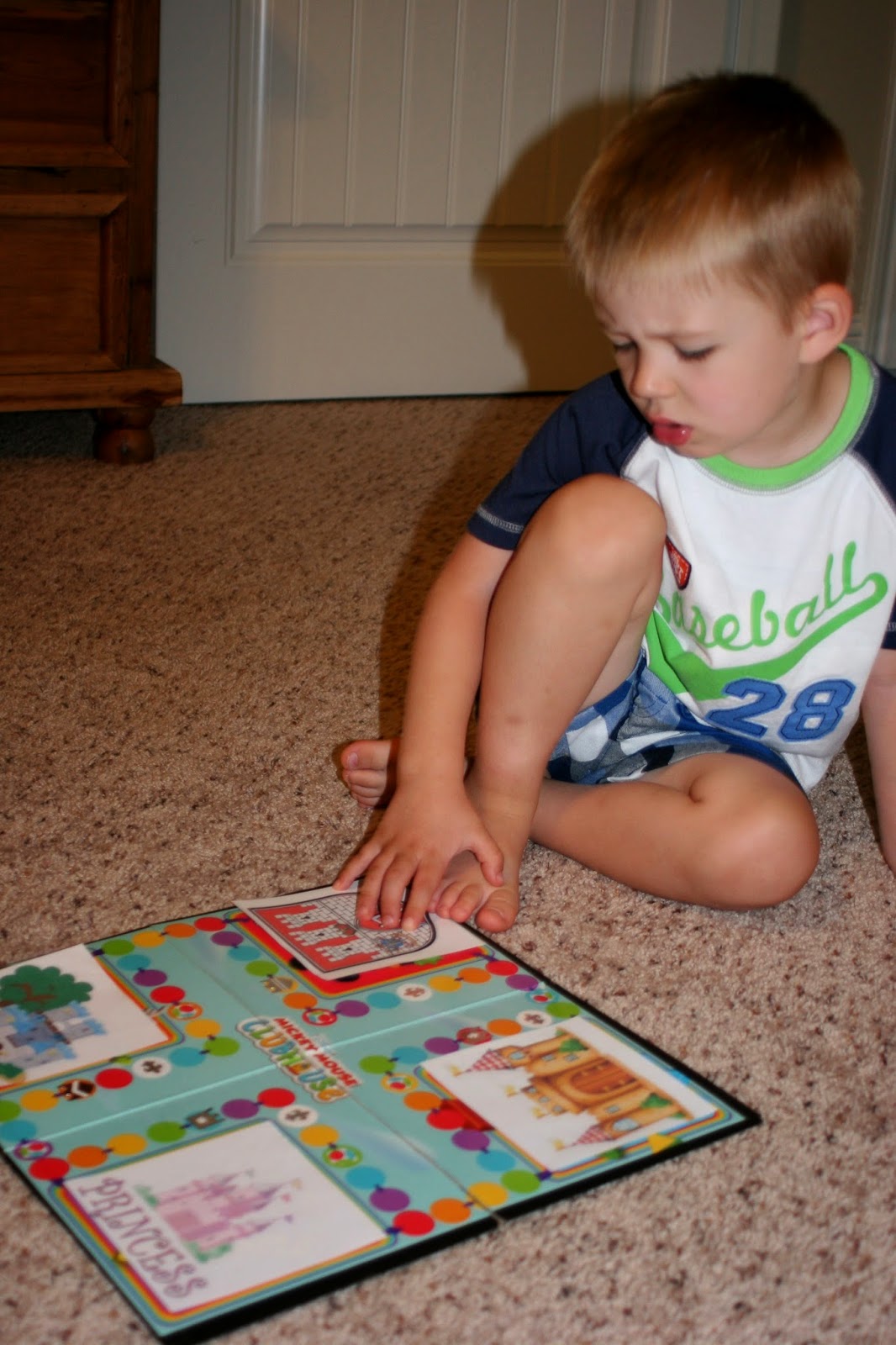 Here is my son planning out his castle. (Such a serious look) 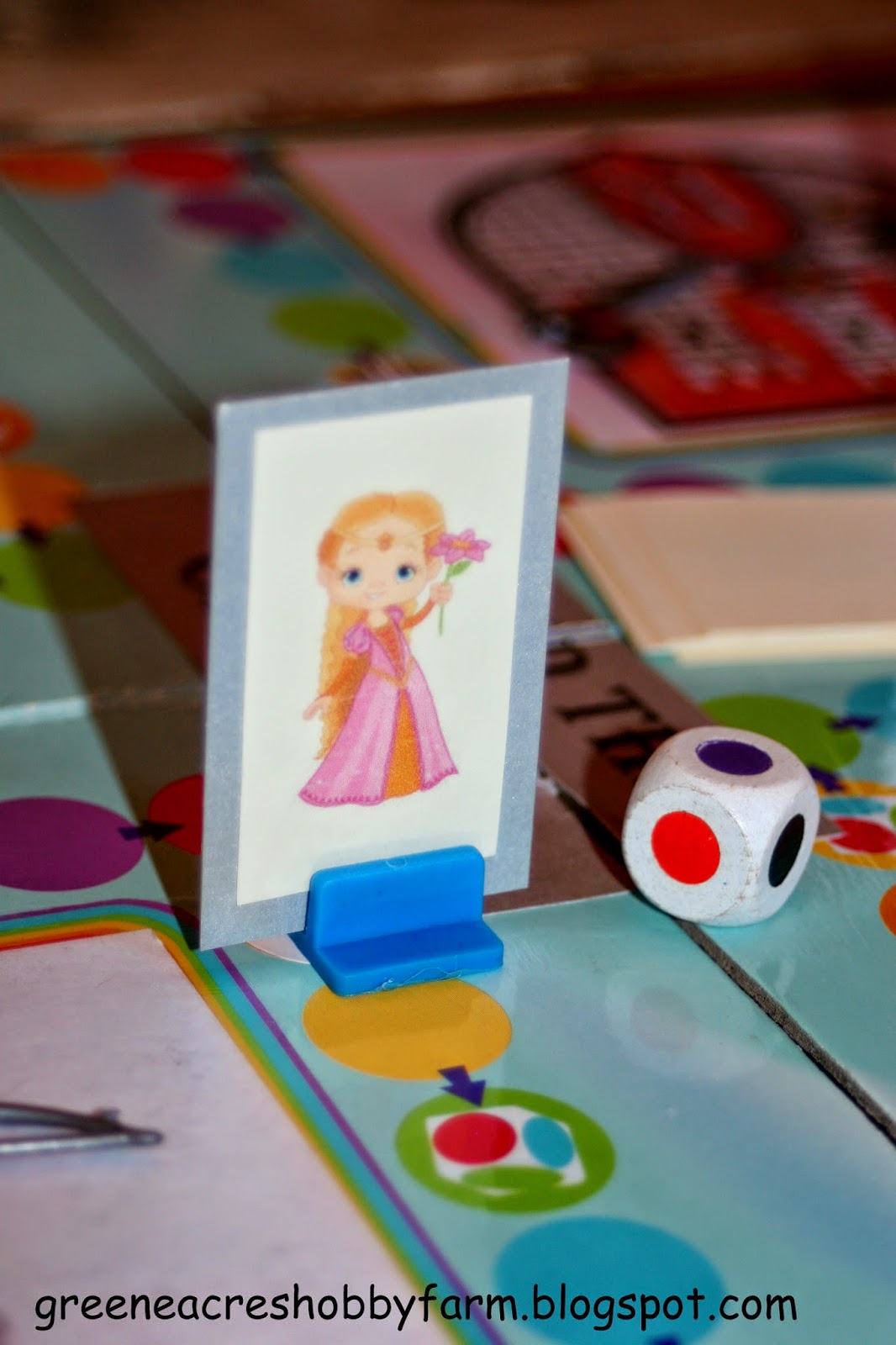 We used the little stands from the existing game and then selected knights and princesses to use as our board game pieces. If you don't have stands, I saw this cute idea below to personalize pieces. Unfortunately, the link I found does not give credit to the true genius behind this idea. Sorry! 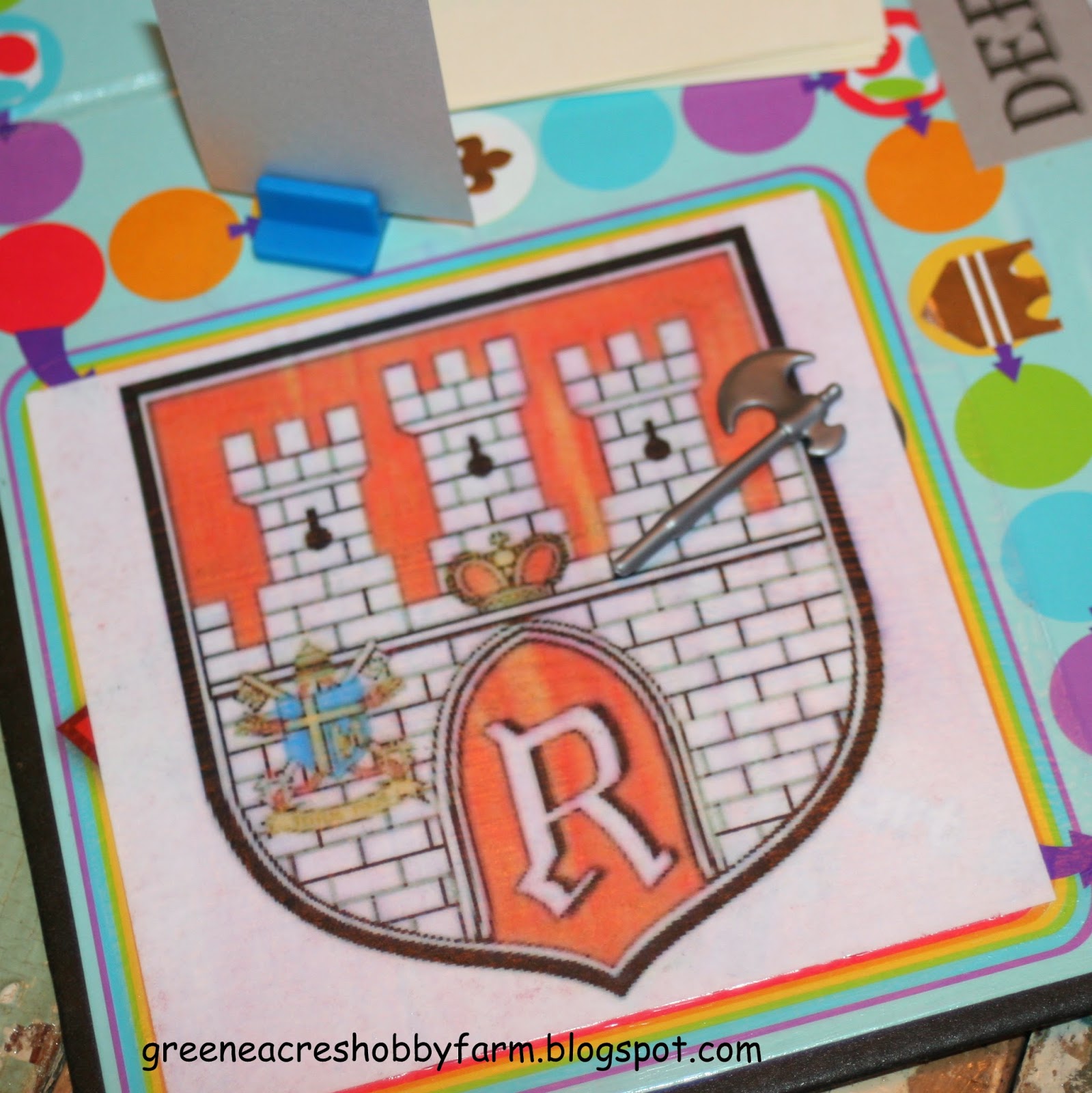 We happened to have some mini weapons lying around, so we used them as part of our game. As the characters move around the game, they can land at a castle. Then the owner of the castle must defend their castle by rolling a regular dice. The one who rolls the highest number wins the battle and the weapon. 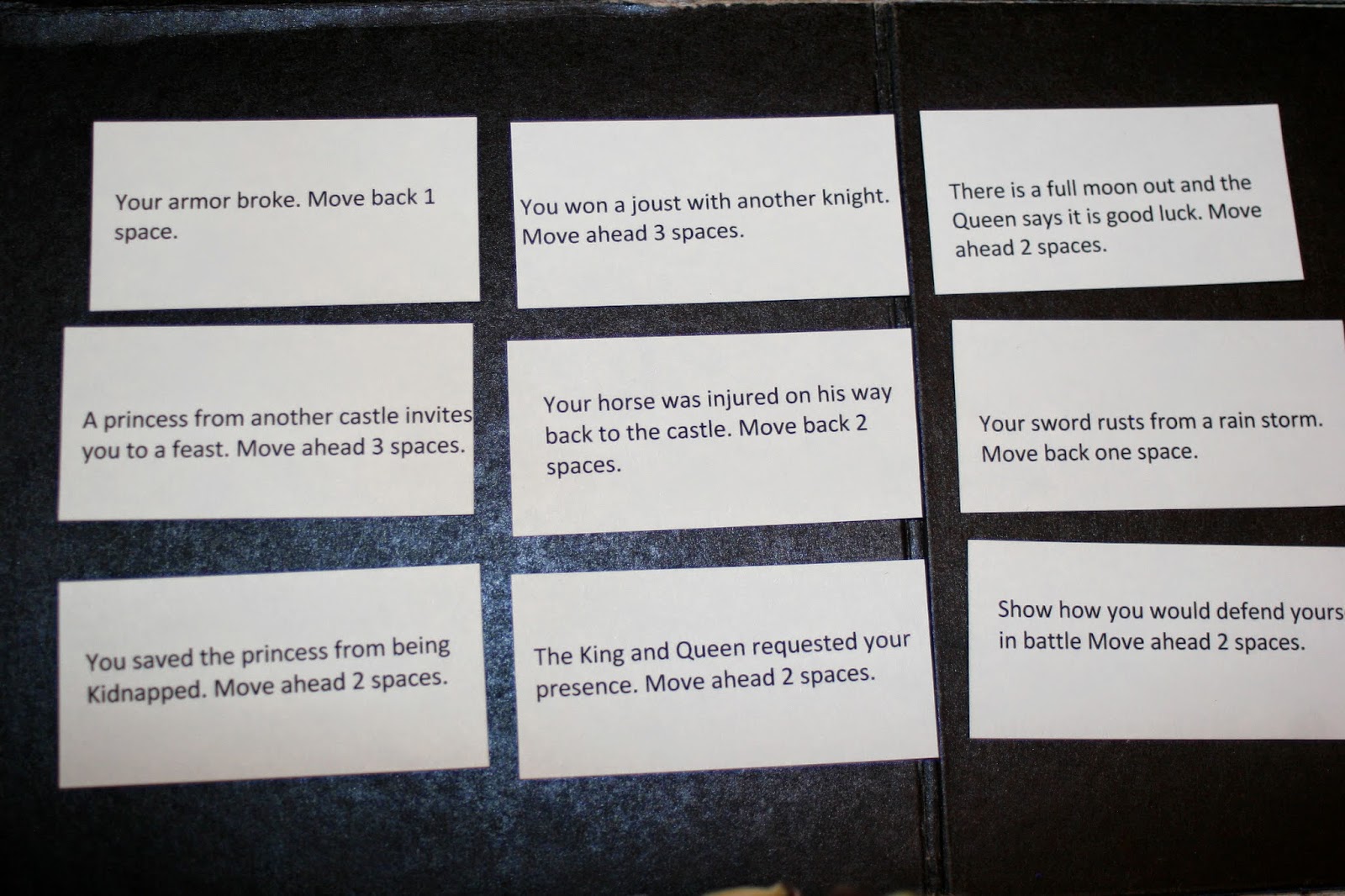 Here are some examples of the cards we made. We placed some stickers on our board of shields. If a player landed on a shield they got to draw a card and follow the instructions.
Some examples:
The handle of your sword breaks. Move back 1 space.
The King and Queen requested your presence. Move ahead 2 spaces.
Fight like a knight and move ahead one space.
The dragon blew his fiery breath at you. Move back 2 spaces.
Show how you would defend yourself in battle. Move ahead 2 spaces.
The kids had fun coming up with fun things to do on the cards. Their favorite cards to draw were the ones that allowed them to be interactive. What little boy does not like to pretend sword fight?!
I think I am going to end up laminating the pieces if they keep playing it so much so they will keep their integrity. I have a feeling we will be creating more board games for some summer fun. This project cost us little more then paper and ink and it was fun to make together.
Hope you all have a Great Father's Day!!!
Posted by Michelle at 6:58 AM